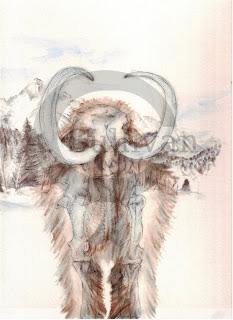 The infamous mammoth as far as my final major project goes resulted in this image contained in a book to W.S. Merwin's poem 'For A Coming Extinction.'
Posted by Ailish Sullivan No comments:

the devil who married three sisters

Illustration from a book based on an Italian folk tale.

The devil was bored so decided to marry a girl who had three sisters. He gave her a big bouquet of flowers but asked her to make one promise - that she would never open a specific door. So she agreed. As soon as he left she opened the door the fires of hell erupted out, burning her flowers. When the devil returned he greeted her but saw that the flowers he had given were burnt and realized what she had done. He opened the gate to hell and threw her in. Next the devil married the second sister but she did the same as well. When the devil married the third sister she put her flowers in a vase. She saw her sisters in hell and immediately helped them out and hid them in boxes before the devil came back. When he did indeed return he saw the fresh flowers and for the first time he loved her. She asked a favor in return for her not looking through the door, that he bring three boxes to her mother's house without opening them. He agreed, so she stood on the balcony as he hauled each box one by one to her mothers. Along the way he was sometimes tempted to look inside but each time he stopped he heard her voice shout to him to keep going and to remember his promise. Eventually all the boxes were delivered and when the devil returned he expected a welcome. Running upstairs he found a dummy in the shape of his wife that was starring over the balcony . Thinking she had run away he ran to her mother's to tell her of her shame. But as he came into the courtyard of the house he saw all three sisters on the balcony and ran in fear back to hell and vowed never to marry again.

Now, I'm not Italian and I do not like some aspects of the story. ( My family arguing over the fact that the fact that the devil cannot love.) I am at a loss as to why the devil was so scarred of three sister but oh well... it made a great story to turn into a book which helped me pass my testing to move onto the final stage of my foundation art course.
Posted by Ailish Sullivan No comments: 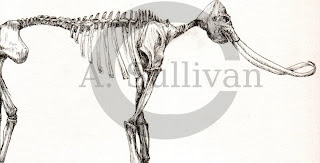 Using a mammoth as an experiment in various mediums while working on my final major project (which will last a very, very long time). This is a quick pen drawing of the skeleton I've been using to help with formating a page. At the moment I am really interested in overlaying different techniques and textures.
Posted by Ailish Sullivan No comments: 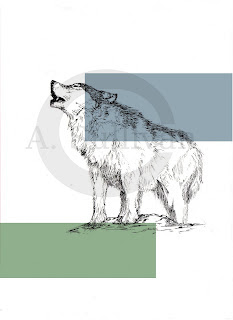 Supposed to be a Dire wolf, an ancient relative of the modern day Grey wolf. Extinct around the 10th millennium BC after the decline of the ice age.

Small page plan in preparing for a book on extinct animals I am making for my final major project this year.
Posted by Ailish Sullivan No comments:

Ok... here goes. I've decided to start another blog to document the other work I do for school in the hope that I can turn this into a professional blog one day.......
Posted by Ailish Sullivan No comments:

Promote Your Page Too